Last year, when I was sharing a car to work with seven or eight more people, I considered to implement some kind of application to decide who should be driving his/her car each of the days. It seems somehow easy to decide it, but when you are many people, some of them could take the day off at work, get sick, even some of them don't have a car... There are many cases to take into account, so it deserves having a program to make the choice for us. So let's start planning it!

Since the very beginning I've thought of two different servers, one to host the Single Sign On (SSO) solution (keycloak in my case) and the other one for the application itself. Since I planned to build my application using spring boot and it already has wide Oauth2 - Open Id Connect support, the communication between the servers is done almost seamlessly.

In summary, I'll be running docker in both of the servers, using it's docker compose tool to run a basic orchestration in each of them. The SSO server will have a mariadb database instance where keycloak persists its data. Also a web based DB admin tool such as phpmyadmin will be available, in order to provide DB management from any device. The HTTP requests from the outside world will be made through a nginx server acting as a reverse proxy, managing the SSL certificates to encrypt the communication. The second server containing my own application happens to be almost identical in architectural means. 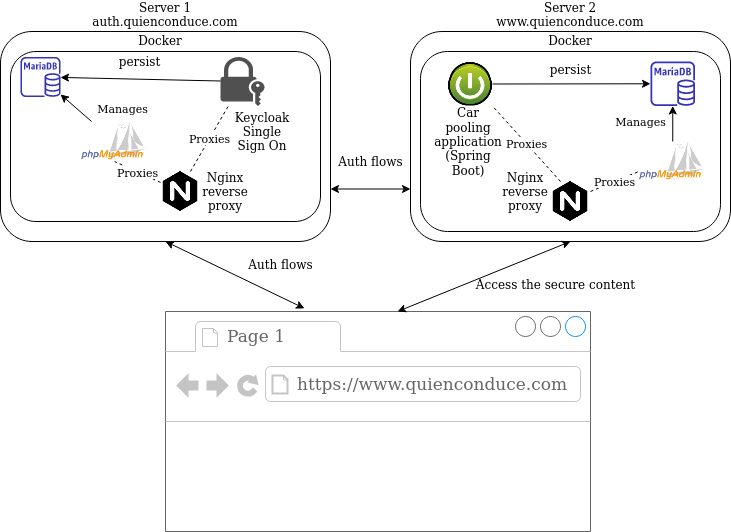 Well, I decided to go with the infrastructure firstly. It might sound a bit weird, but having spent the last years mostly as a web developer, I had never dealt with hosting/domain administration myself before, so it was the perfect time to start with it! I chose the OVH provider, so I signed up in their site to set up my own domain:

The next step was to order the servers: OVH provides virtual servers at a very affordable price, so I chose the cheapest plan, with 1 virtual core and 2 GB of RAM, considering that the traffic won't be too high, this should be enough to fulfill my needs. The OS I chose was Ubuntu Server 18.04.

Since I wanted my application to look a bit of professional, I also bought a mail service for my domain. The cheapest OVH fares offers up to five accounts, which seemed more than enough for what I need. This will be the mail server for sending the e-mail messages for the users Sign Up process and notifications: 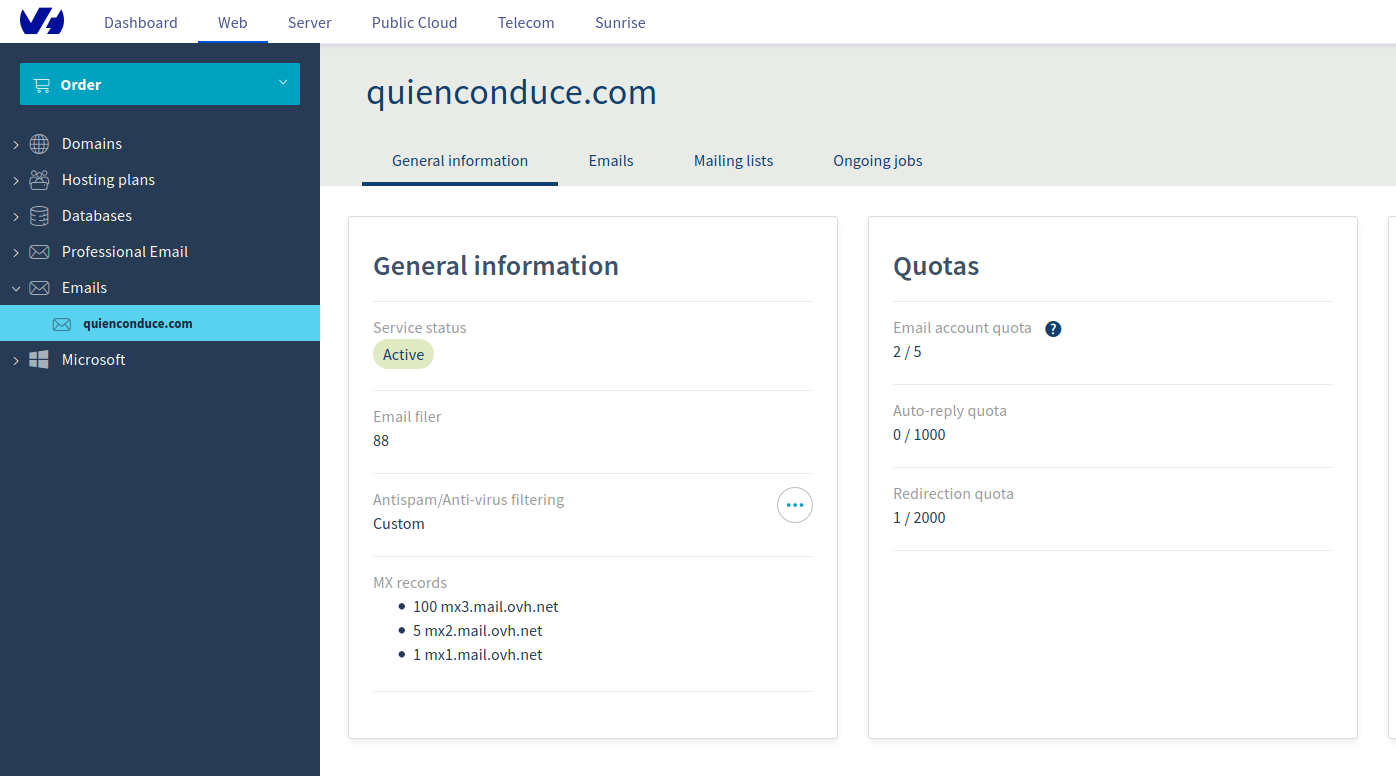 Apart from this, I also wanted the main domain name to redirect to my application. This means, redirect quienconduce.com requests to https://www.quienconduce.com, so I assigned a permanent visible redirection for this, returning the 301 HTTP code as a response and pointing to my application url when requested. This is the whole picture of my redirections, including the ones for the mail server and all the applications: 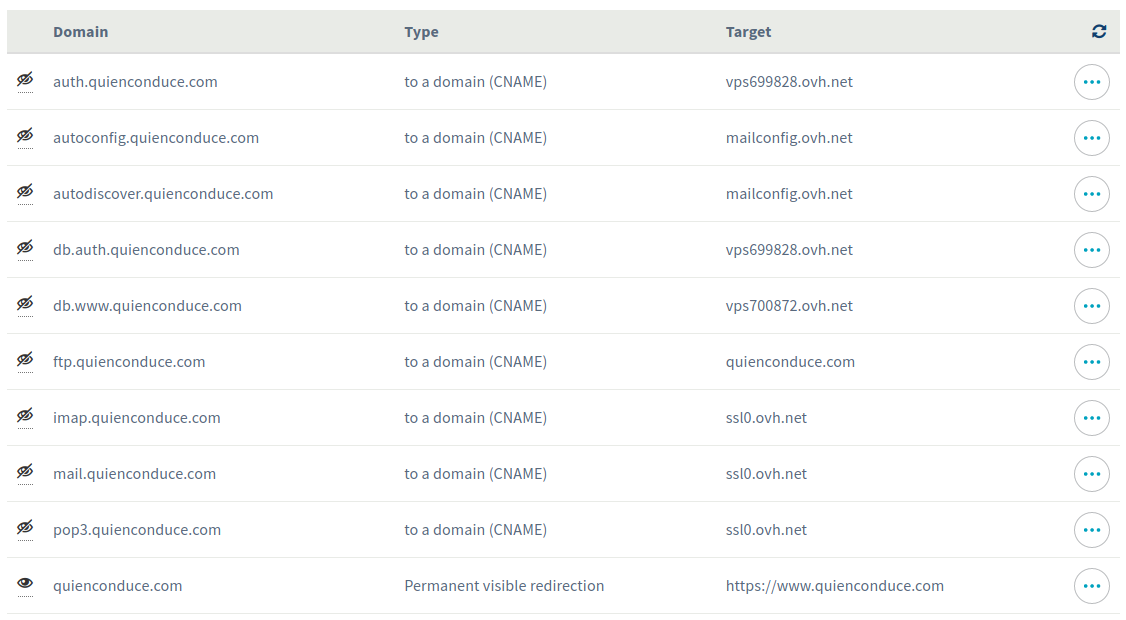 Talking to the servers

I'm using Linux Mint in my PC at home, where the SSH client package is already installed, so connecting to the servers is a one liner such as:

Anyway, keep in mind that using the root user directly isn't advisable, so better create a standard user and add it to the sudoers group with these steps:

Then log in with the standard user and use sudo when required:

Keycloak as my SSO solution

Keycloak is a Single Sign On solution brought by Red Hat, which provides:

The main advantage of using an already built open source product for securizing any application is that there are many people working on it, who are considered to have more expertise in the security field than myself or any full stack focused programmer. The IT security by itself is a complex subject, so better use already available libs - software, as long as they are backed by trusted companies - communities.

Keycloak is compatible with some of the most popular database engines, but I decided myself to use mariadb, instead of relying in the built in H2 database, which is not advisable for production stages. Here it is my docker-compose.yml configuration:

Basically, this downloads the images of mariaDB and keycloak from the docker hub and launches them in two containers, so as the SSO instance connects to the database. Also a user named "keycloak" will be created in the SSO server.

Couple of security related things here, in the mariadb container the port 3306 from the host is binded to the 3306 of the container, but apart from this I added the localhost address before, meaning that the DB server will only be available in the host machine. Also, since I like uploading the docker compose files to the source control server to keep track of them, the passwords are set in docker environment variables, which are grabbed from an .env file in the same directory of the compose file, thus not being uploaded to the server.

Managing the database through a web-based client

Having a web based client available is quite convenient, in order to be able to make changes from any browser. If we want to use a more advanced desktop client, we can configure SSH tunneling later on. The most popular tool for mysql - mariadb administration is phpmyadmin, so let's configure it in our docker compose file:

With the given configuration, I've got three applications running: mariadb, bound in the 3306 port, keycloak running in 8080 and phpmyadmin in 8081. But I would like to give names to these services to be publicly accessible. keycloak should be accessible by https://auth.quienconduce.com and phpmyadmin in https://db.auth.quienconduce.com, as I have already defined in my DNS registries. This task can be done configuring a reverse proxy at the top of them, so I chose to use nginx for this:

This isn't the standard nginx docker container, but a customized docker image which allows to integrate automatic SSL certificate generation for our site (thanks @Valian ;-)). This image relies on the open resty server and the let's encrypt tool: a free, automated open certificate authority. We need to configure two docker volumes for this, the one needed for resty ssl data and the other for the nginx config itself. In our host machine, let's place two configuration files in /home/aritz/nginx:

This will make nginx proxy-pass the requests made to https://auth.quienconduce.com and https://db.auth.quienconduce.com to the keycloak and phpmyadmin servers, including the request headers defined. Here I use the docker aliases of the services to specify the host for the proxy_pass rule. However, for some reason I had to manually specify the port for keycloak, nginx wasn't able to find it otherwise.

After the docker compose file is configured, we just have to run this command to have everything up and running:

After this, we can see that both SSO and database admin servers are accessible through their DNS names in a secure manner: 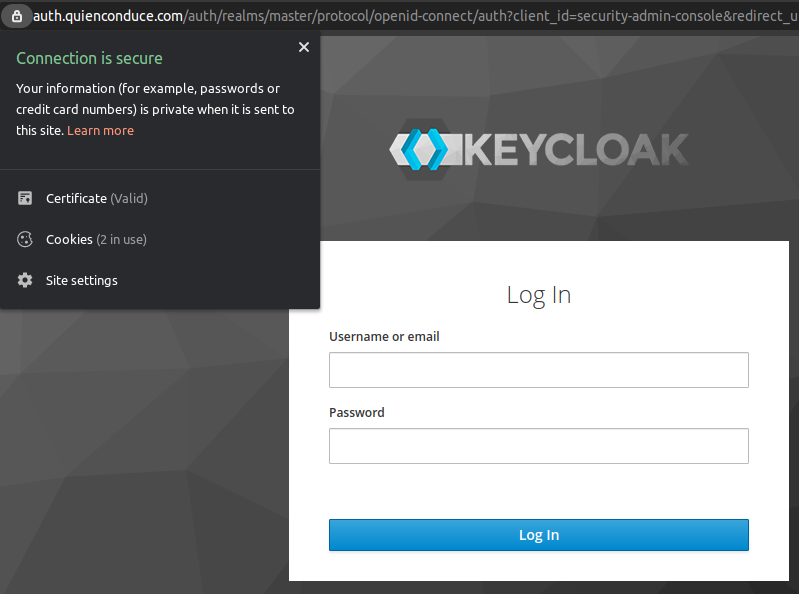 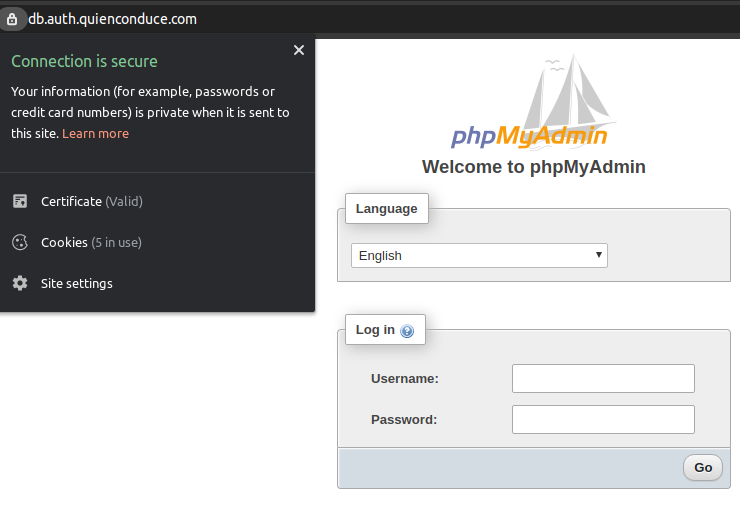 This is the list of running containers, with its names and port mappings:

I wanted the DB to be backed up to some external site in case the server hard disk crashes or the information is lost after some fatal failure. So I wrote an script which uses rclone and copies the dump of the database content to my dropbox account:

The rclone configuration file contains my dropbox account access token, so I set the script to run every night in the crontab, with the docker compose script configured to run in every reboot alongside:

Even if spring boot provides a great way to set up web applications in a breeze, I wanted to speed up the process and decided to use the jhipster application generator. This tool is amazing since it lets you design your own entity domain model and then generate both the backend code written in java - spring and the front end using either Angular or ReactJs: In my case, I chose Angular. This is a snapshot of the web entity generator: 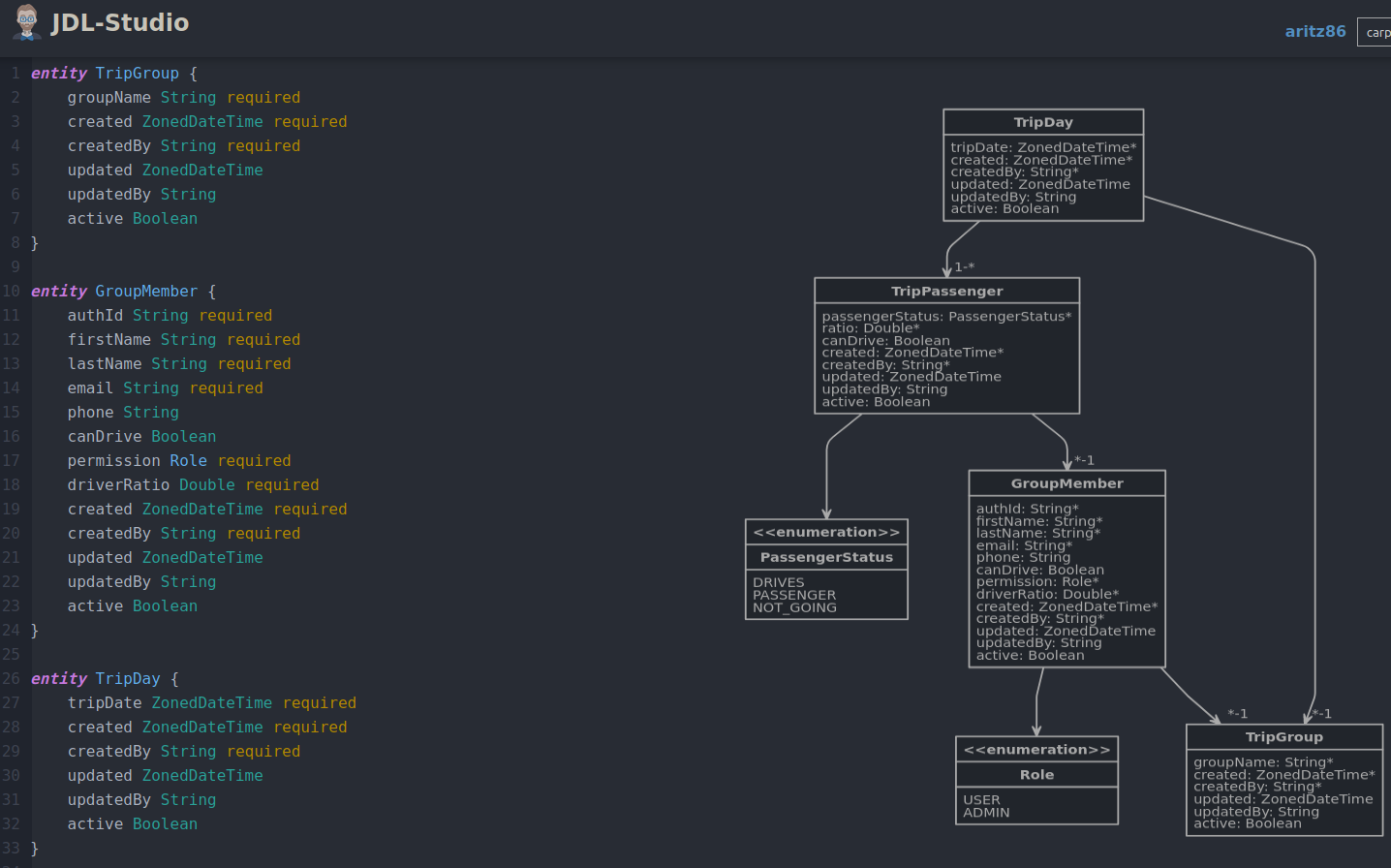 After having the model well dessigned and following the set up steps given by the tool, all the application got up and running. I got the hibernate entity classes, the CRUD operations for them implemented in a spring boot REST API, and the web application with all the CRUD operations implemented using Angular 7. Even the unit and some integration tests running the h2 database are generated! I've never been a big fan of code generation tools but this definitelly provides value.

Configuring the continuous integration in gitlab

After finishing the set up and checked that everything was compiling, I uploaded my git repo to gitlab. This platform provides continuous integration with pipelines for different stages, so it's quite handy for my project, even if I'm the only developer working on it.

The stages defined in my pipeline configuration file are build, test and deploy. The first two get executed on each of the code pushes and the third only when a new branch is created. Inside them, the maven and node docker images are used to build the software and pass the test benchmarks, also the dependencies are configured to be cached to speed up the pipeline process.

The deploy stage had a bit more to configure here, since I rely on google's jib maven plugin to build the docker image containing my application and upload it to the docker hub registry, so I needed to declare the DOCKER_REGISTRY_USER and DOCKER_REGISTRY_PASS environment variables, which are used to provide the credentials for uploading to the docker hub and are established in the gitlab CI settings, as I don't want them in the source control.

This is how the project pipeline story looks like for the master branch:

Last but not least, many thanks to @Irene Uson who spent some time designing the logo for the website. Good job!